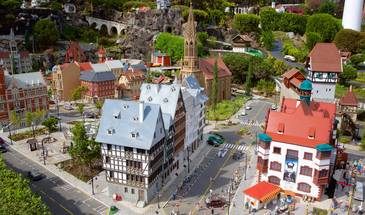 Welcome in Guatemala City. Reception at the airport of La Aurora and transfer to the hotel, accommodation and rest after the flight.

Breakfast in the hotel. Then you will move to Retalhuleu Department. You will visit the Mayan archeological monument of culture - Takalik Abah, which was found in 2008, where you will see impressive monuments and sculptures dating from about 200 BC-150 AD. Takali Abah was the center of commerce for the Olmecs, and subsequently Maya Indians.
After the tour you will stop for lunch. Next, a short transfer to the hotel. Upon arrival accommodation and the continuation of the adventure!
You will visit Dino Park (Jurasic Park), Xulik (museum of super heroes of Marvel film studio and DC)
Dino Park, an amusement park where you can feel that you are traveling in prehistory times and live with more than 25 dinosaurs in their natural environment.
The technology with which animatronic dinosaurs are made is impressive because they breathe, move, and some even walk. In addition to reptiles, the park also has the first animatronic figure of a man in Guatemala, this is Steven Spielberg, who receives guests at the reception.
This innovative park has attractions for children and adults, where you can spend hours enjoying the proximity to dinosaurs and watch the unique movie collections of the Jurassic Park.
Memories of childhood in the Xulik Toy Museum, where you will find a world of superheroes, figures, collectibles, unique items and more.
The Xulik Museum of Superheroes and Toys offers its visitors all kinds of exhibits and objects related to the characters of the two largest and oldest comics: DC Comics and Marvel. From statues, cues, posters, autographed photos, collectibles and many other items that make you feel like a child again.
Some of the main attractions of the theme park are original pieces used in films such as Lord of the Rings, Batman and Robin, Titanic and Hulk. Replicas of characters, such as Spiderman, E.T., Smeagol and Freddy Krueger, also attract the attention of visitors.

You will spend two days full of entertainment in the theme parks Xocomil (Akuapark) and Xetulul (mechanical games and Culture Squares of European countries): Germany, France, Spain, Italy and Guatemala with restaurants of typical cuisine of each country and buildings, characteristic architecture).

Amusement park Xetulul awaits you with a lot of adventures!
You will be surprised to find yourself suddenly in the square of Italy in front of a replica of the Trevi Fountain or in the square of France in front of the Moulin Rouge!
Buildings that mimic the beautiful sights of Guatemala and other parts of the world with international cuisine restaurants typical of each country represented.
The fun is at the limit with a roller coaster, crazy carts, a theater and its magic shows ... among many other things in Xetulul.
The Xocomil Waterpark envelops you with a refreshing and fun unforgettable experience where you have a great time with friends or family.
The all-water amusements from calm to breathtaking ... all this and much more can be found in Xocomil.
Accommodation in the same hotel. Meals breakfasts.

In the morning you will go to Panajachel, located on the shore of Lake Atitlan, one of the largest and most beautiful alpine lakes in the world. In the vicinity of the lake there are three volcanoes, named after the powerful elements: water, fire and air. You can visit the local handicraft market. After lunch, transfer to one of the most beautiful cities in Central America - Antigua. The city was founded in 1543 and is recognized by UNESCO as a world heritage of mankind.
Surrounded by volcanoes, the ancient center of Guatemala repeatedly suffered from their destructive actions, and the strongest earthquake of Santa Marta in 1773 forced the rulers to move the capital to another place. Since then, time in Antigua seems to have stopped.
Hotel accommodation.
Acquaintance with the city. During the tour of Antigua, located at the foot of the Water Volcano, you will get acquainted with the buildings of the Mayan civilization and the later, colonial architecture. Of particular note are the Metropolitan Cathedral, the churches of San Francisco and Nuestra Señora de la Merced, the Museum of Arms, the Palace of Palacio de los Capitanes Generalas, etc.

Breakfast in the hotel. Tour to Poas Volcano National Park. The volcano, whose crater diameter is 1.5 km, is considered one of the largest geysers in the world. The volcano periodically erupts columns of steam and gas from its depths, however, the ascent to its crater is absolutely safe for tourists. Poas is surrounded by tropical cloud forest: century-old trees side by side with beautiful orchids and bromels. And the rare Hunner here got its name “umbrella for the poor”, thanks to its huge leaves. A view of the main crater of the volcano, a picture of a lake located in its center with its turquoise water will make visiting this park an unforgettable event of your journey.
Further visit to the park waterfalls La Paz (birds, butterflies, monkeys, garden hummingbirds, snakes, cat-like predators, frogs and 5 waterfalls). Dinner. Return to the hotel in San Jose.

Breakfast. Transfer to the Pacific coast of Costa Rica, the beach of Punta Leon. On the way, tour along the river Tacoles and the mangroves of Guacalio. Observing the flora and fauna of this climate zone of Costa Rica. After lunch, continue to the hotel. Rest in the beach hotel with "all inclusive" plan.

Rest in the beach hotel on an "all inclusive" plan.