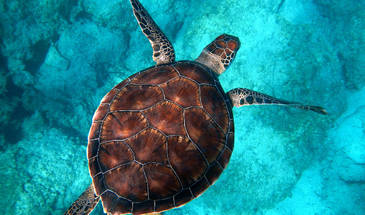 There are regular departures once or twice a week to the world famous Blue Hole, a must for any serious diver. In 2013 it was tipped to become the 8th natural wonder of the world. There are hotels to suit every kind of traveller from basic to very upscale. Food and nightlife play a big part in any vacation to the island and there is a wealth of dining choices. Most bars and restaurants overlook the Carribean. Just off the coast of the coast of the islands on the lea side, lies the most upscale private island in Belize, Cayo Espanto. The island is full of dive resorts, dive shops, snorkeling sites including the Hol Chan Marine Park and Shark Ray Alley, which as its name implies, is a haven for those wishing to get up close and personal with turtles, sharks, rays and other marine life.

Welcome to Belize! After a very short transfer in the International airport to a domestic flight you will have an incredible birds eye view of the islands and reef as you take the 18-minute flight to San Pedro on Ambergris Caye. The town made famousin the song by Madonna “I left my heart in San Pedro...” You will be met at the local airstrip for a golf cart or taxi ride to your hotel. There are numerous local restaurants to choose from for a beachside dinner.

Today you will be snorkelling on the second longest barrier in the world on two prime sites in the protected Hol Chan National Marine Park. In the park you will snorkel the world famous Shark Ray Alley site and as the name implies, you will be snorkelling with harmless nurse sharks and southern stingrays and a colourful array of marine life including turtles. The rest of the day is at leisure to explore down town or chill on the beach.

Day of Leisure on Ambergris Caye

A day at leisure but perhaps you will go fishing on the barrier reef or deep sea fishing, Diving, Snorkelling, Kayaking or just relax on the beach. Your resort tour desk can assist inarranging any of these or additional touring options. Before sunset you will be transported to join a sunset cruise aboard a Catamaran with snacks and beverages on board. This is the best way to enjoy the ocean and to see the island from the ocean.

Flight to the Belize International Airport

After breakfast, a short golf cart or taxi ride to the local airstrip for the 18–minute flight to International Airport to take your flight home.